A Walk through the Village

Todays painting is a familiar view Jemima and I see most days, a small lane wanders through Verinas which is more or less a collection of old barns with a few more modern houses on the outside of the village, when you wander through it's not hard to imagine life as it must have been over a hundred years ago.


Jemima had a lovely walk with some new friends this evening around the lake at Rochechouart, my nearby town, it's great to see how dogs interact with each other; one a bit grumpy so she stears clear for a while and takes her time before getting too close, one a typical friendly playful Labrador and one (the breed I cant remember apparently used to herd cattle in France) which had a problem with its legs, but was so happy and friendly she didnt seem bothered by it.

BIG NEWS - I've told Jemima Coco's in town, well she's in Nice actually. A friend from Washington is working there for a while and has brought her dog Coco with her, so there seems to me there is a good excuse for her to visit the South of France! Mary is writing a blog about her experiences in and around Nice called 'Mary & Coco in Nice'  it's worth a look!
Posted by nigelfletcher at 18:26 No comments:
Email ThisBlogThis!Share to TwitterShare to FacebookShare to Pinterest

Just around the corner in the old village of Grand Meynieux there sits in hidden corners the memories of a farming life apparently long gone. And I cant wait until I can get out once it gets a little dryer and warmer with my sketchbook and really search out these places.

Posted by nigelfletcher at 09:51 No comments:
Email ThisBlogThis!Share to TwitterShare to FacebookShare to Pinterest


Couldn't resist another Summer painting as it's gray and wet here again today, and although it is there's no reason why the moody and limited colour images can't be studied, so watch this space...

Walks with Jemima have been a little shorter this weekend but I took her to the local lakes this afternoon when the clouds lifted, she's hopeless about travelling in the car and I almost had to lift her in, she hasn't figured out that each time she is taken in the car it's because at the end of the journey something good happens for her (well most of the time) And so it was; she leapt out and ran straight for the water, skidding to a halt at the last moment 'this might be too deep for me'.  She couldn't help herself though and once she found a place where she wouldnt be out of her depth she was in! great entertainment too, it allowed me to enjoy the stillness of the lake and the late afternoon light.  When I'd had enough, she did her best to dry herself in the dried grass....but this time I did have to lift her into the car, this place is clearly too good to leave after just one hour! 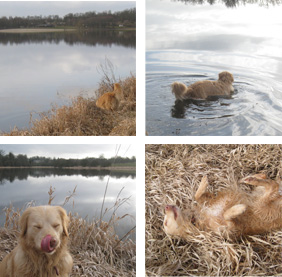 Posted by nigelfletcher at 18:56 No comments:
Email ThisBlogThis!Share to TwitterShare to FacebookShare to Pinterest

Todays painting is yet another from last Summer, and a slight Monet influence again. I'm going to do more and larger for the forthcoming exhibition back home in Sibford, more details will be posted here at a later date.
Last week was sunny almost every day, couldn't believe it, really gorgeous, and warm! (sorry) Jemima was treated to extra long and frequent walks, I notice now that she watches the weather forcasts with eager anticipation! On one particular walk we sometimes come across a lone horse, a friendly and pretty young lady who just wants to play, however Jemima can't quite get it, she's bigger and that must mean dangerous, I can understand her in a way, the other day she was brave enough to go under the fence into the field, the young 'pretty' horse was between her and the barbed wire fence! I thought she hadn't thought that through very well. Young 'pretty' horse thought funtime! and chased her around the field, Jemima was terrified and legged it under the horse and through the fence leaving a large chunk of golden fur behind on the wire! It'll take a while before the pretty young horse has this playmate in her field anytime soon...

Posted by nigelfletcher at 18:40 No comments:
Email ThisBlogThis!Share to TwitterShare to FacebookShare to Pinterest

Sunlight behind the Poplars


Todays watercolour was inspired by Monet's 'Sunlight under the Poplars'  I had seen a similar view on a recent early morning walk with jemima and let the great mans work influence my treatment of it.
More exploring of the local villages and came across Les Soumagnes, as we drove into the hamlet we were spotted by an enormous black dog standing proud behind a wall in someone's garden, his eyes followed us as we gingerly entered his domain. We wandered through Les Soumagnes - mostly beautiful old stome barns and little allyways shaded from the sunshine, me taking photos and jemima hoovering all the tasty bits and pieces on the ground and generally enjoying all the new smells. We turned the corner and there he was, tall and strong waiting in the middle of the lane, we froze! Gingerly, little fluffy whouldn't hurt a flea Jemima made her way closer to appologise ... 'Its not my fault we're here, he made me come, please don't hurt me'  Three minutes later she had him hooked, he was transfixed, she gave him a boxing lesson and showed him the best smells to sniff in his village!  A few minutes later some villagers appeared and said his name was Enzo (Ferrari?) and were amazed at his sudden subordination...thats my gal!

Posted by nigelfletcher at 13:21 No comments:
Email ThisBlogThis!Share to TwitterShare to FacebookShare to Pinterest

Another summery painting, I feel I'm cheating a little doing these Summer paintings, there is plenty of interesting subtle colour going on out there, but its just so COLD too! So I hope I'm forgiven for cheating a little and using old imagery. Speaking of the cold and generally being a wimp, I go to the local village and there's an elderly gent who's making his way very slowly along the road with the aid of a large stick, I've stopped to chat to him occasionally, well by chat I mean comment on the weather and say I'm going to get a bagette. He said once that his right side is paralised and he has to walk every day to try to help cure it. Today its FREEZING outside but he's there doing his walking thing, now I think that's one gritty geezer! I hope he makes it and returns to health, he's got a very large garden....!
Posted by nigelfletcher at 09:01 No comments:
Email ThisBlogThis!Share to TwitterShare to FacebookShare to Pinterest
Newer Posts Older Posts Home
Subscribe to: Posts (Atom)

Subscribe to see what and where I've been painting